The AmplideX mPCR FMR1 Kit employs an innovative PCR-only approach for the detection of methylation status in the FMR1 gene. These reagents determine the extent of methylation of each individual allele in both male and female samples, and thus eliminate the need to run tedious and time consuming Southern blots. 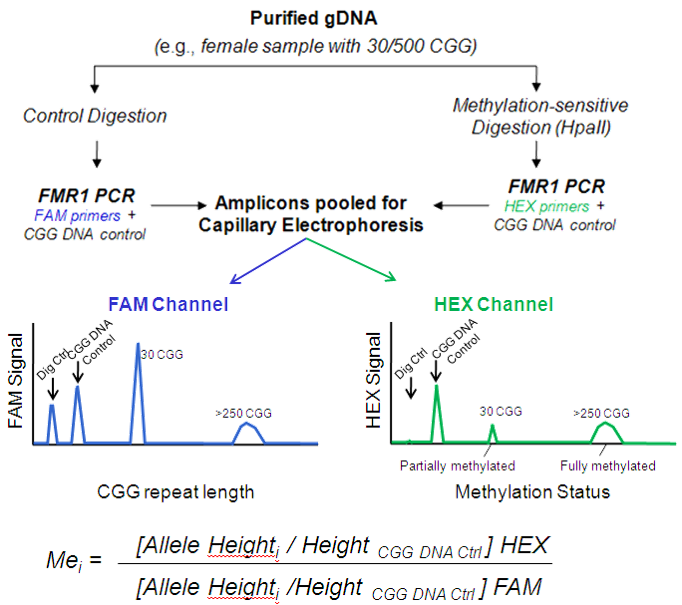 The FMR1 protein is a RNA-binding protein that acts as a global regulator of translation in neurons and is important for synaptic plasticity. Because of its key role in neural development and RNA transport, stability, and translation, this gene is implicated in a number of fragile X-related disorders.

Individuals with full mutations (>200 CGG repeats) often present classic FXS, characterised by mental retardation, autism, and emotional and psychiatric challenges due to hypermethylation of the expanded repeats in the FMR1 gene. Moreover, the severity of the phenotype may be associated with methylation status of the expanded allele and not just the number of CGG repeats.

Most testing paradigms for FMR1 disorders rely on a combination of PCR with size resolution by capillary electrophoresis and FMR1 Southern blot analysis which is used to determine the methylation status of the gene. Unfortunately, this workflow is costly, time- and labor-intensive, and requires large amounts of genomic DNA, and the data quality can be ambiguous to interpret. The AmplideX mPCR FMR1 assay provides a fast, simple solution to overcome these issues.

It enables the researcher to amplify and detect the number of the CGG repeats in the FMR1 gene and its associated methylation status in the 5’-untranslated region, without any requirement for Southern blot analysis .