Ease-of-analysis of the FMR1 gene has been simplified through:

AmplideX PCR/CE FMR1 Kit is an in vitro diagnostic (IVD) device for use in clinical laboratories for detection of the CGG repeats in the fragile X mental retardation (FMR1) gene.

The device is intended to aid in the diagnosis of fragile X syndrome and fragile X associated disorders, e.g. tremor and ataxia syndrome (FX-TAS) and primary ovarian insufficiency (FXPOI), through determination of CGG repeat length up to 200 CGG and detection of alleles greater than 200 CGG.

The kit provides a PCR-only approach based on Triplet Repeat Primed PCR (TP-PCR) design to reliably amplify and detect all alleles including Full Mutations. 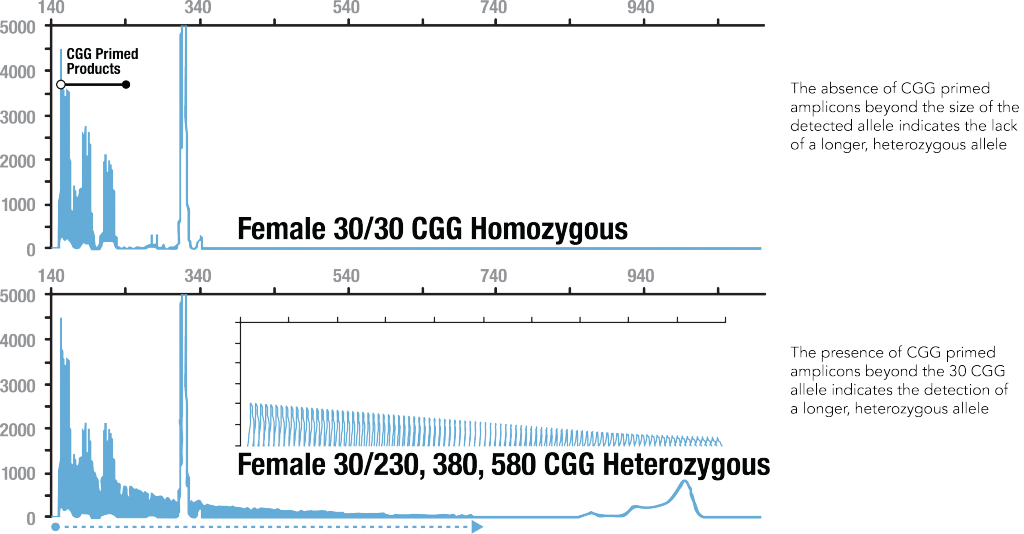 Fragile X syndrome (FXS) is a trinucleotide repeat disease caused predominantly by the expansion of CGG sequences in the 5’ untranslated region of the Fragile X Mental Retardation 1 (FMR1, NM_002024.4) gene. Expansion of this region to 200 or more repeats is associated with hypermethylation and resulting inactivation of the FMR1 gene. Lack of the gene product through hypermethylation results in loss of FMRP, an RNA-binding protein that acts as a global regulator of translation in neurons and is important for synaptic plasticity. Because of its key role in neural development and RNA transport, loss of this protein is linked to the fragile X syndrome phenotype, which is characterised by mental retardation, autism, and emotional and psychiatric challenges.

Premutation alleles are linked to fragile X-associated primary ovarian insufficiency (FXPOI) a leading cause of ovarian dysfunction in women, and fragile X-associated tremor and ataxia syndrome (FXTAS). FXTAS, which affects more males than females, is a late-onset disorder characterised by progressive cognitive and behavioral difficulties and intention tremors and ataxia. These premutation disorders are characterised by an increase in mRNA transcription but lower protein levels.